Last week may have drawn to a close, but the march of Clevo news continues. On the heels of Maingear announcing an 11-inch gaming notebook, Origin PC is throwing its own ultraportable into the ring: the EON 11-S. Though this is a new model for the company (the smallest laptop it's ever sold, in fact), it's not quite fresh to us: this is the same exact Clevo-made notebook Maingear unveiled two days ago, only re-badged under Origin PC's brand and available in a wider range of colors. As far as performance goes, then, that means you can expect Ivy Bridge processors, a 2GB NVIDIA GT 650M GPU, Optimus graphics-switching technology and a battery rated for 6.5 hours of runtime. In Origin PC's case, the laptop starts at $999 (compared with $1,099 for Maingear), though you'll have to head over to Origin's site for a breakdown of what specs you'll be getting at that lower price.

AMD kicked off 2012 by refreshing its desktop graphics, and now it's back, giving its mobile GPUs the same treatment. The company just announced its third generation of DirectX 11 mobile chips, the Radeon HD 7000 family. All told, the collection includes three 28nm GPUs: the high-end 7900M, the mainstream 7800M and, last but not least, the 7700M, a darling little chip intended for AMD's thin and light Ultrabook competitors. Across the board, the series ushers in a new feature AMD is calling Enduro, a graphics-switching technology that takes direct aim at NVIDIA Optimus. Building on older AMD technologies like PowerXpress, it doesn't require you to close apps, reboot your system or manually specify which apps will trigger the GPU. Additionally, it's designed to work with both Intel CPUs and AMD's own application processing units, so presumably you'll find this inside some Ivy Bridge machines too. With this generation, too, the two higher-end chips support the PCI Express 3.0 interface, and all three make use of AMD's existing ZeroCore Power and Power Gating battery-saving features. That's the abridged version, but we also have a full breakdown of the specs awaiting you past the break.

http://www.dell.com/us/p/alienware-M17x-r3/pd.aspx?~ck=mn
Want to stay unplugged for a while? Available NVIDIA Optimus technology automatically adjusts your graphics power to the task at hand (Optimus™ technology not available on 3-D Enabled units). End result: On demand power without sacrificing battery life or performance.

The Ubuntu forums post below summarizes the current information on the
AMD/Indel Hybrid Graphics systems:

Apple implemented the switching of the two graphic cards using a
"chip" dubbed the "gmux". This gmux can power down the dedicated
graphics card, switch the DDC, internal and external display
connections individually between both cards and then set the backlight
brightness. Unlike most newer laptops with hybrid graphics, Apple's
Macbook Pros still use a physical mux.

The gmux has remained mostly the same between all models with
switchable graphics, so it should be possible to develop one Linux
driver that supports all of them.

Andreas Heider took over previous work that Seth Forshee (Canonical
Ltd.) recently rewrote it into a clean, backlight-only driver that (at
the time of this writing, 20120414) will hopefully find it's way into
the mainline Linux kernel soon.

Andreas has been developing on his MBP 6,2 model (MBP 6,1 should be
exactly the same) and his work is available at:

There is a version that works with the Nvidia nouveau drivers and is
integrated with Bumblebee 3.0+. The apple_gmux driver should work for
all models with switchable graphics, but the nouveau components and
the current method to enable the Intel card in BIOS emulation mode
will differ. But once switching works well on one model, it shouldn't
be too hard to make it work on the others.

So, not all is done and dusted, and this is the current status: at the
moment switching works, but it's not fully automated. It's still not
possible to simply boot the system, switch between nouveau/i915 and
turn the dedicated card on/off.

This is not only related to the gmux driver itself but also to
nouveau/i915 and how they handle not having a monitor attached at
boot. So one option to thousand+ members of the hybrid-graphics-linux
team is to just wait for a bit longer, or try the code in a test
system and help Andreas by reporting back the details of the
investigations.

In other news, Andreas found a first solution to the VBIOS
problem. There is a register on the card (0x619f04,
PDISPLAY.VGA.ROM_WINDOW) which points to where the VBIOS should
be. Initially this register is set to 0x000ffe09 on the card but after
a powercycle it's set to 0x1.

If one manually restores it to 0xffe09 using nvapoke and copy the
VBIOS back with nvafakebios, both nouveau and the nvidia-blob load
successfully.

A full demo showing the switching between the GPUs, Bumblebee with
both nvidia and nouveau is available here:

And a screen recording showing Bumblebee in action is here:

The current issues are with using EFI boot, because the Intel card
doesn't work with suspend in BIOS mode. The IRC discussions with mjg59
and airlied resulted in patches to sort out the boot GPU detection on
Apple EFI. Another major issue is the Intel LVDS detection. According
to airlied, the way to go is switch_ddc, which requires to change all
GPU drivers to call a function before reading the EDID data for the
internal display. This in turn switches the EDID line. Some work has
already been done, but it's not finished yet. The other line of
investigation is using reprobe and try to redetect and recreate the
framebuffer upon a GPU switch. At the time of this writing, this
doesn't seem to work well with the current DRM/fbcon
infrastructure.

If you own a Macbook Pro 6,2 or 6,1 and are adventurous enough to try
it you can find the code here:

The newer models use AMD graphics instead of Nvidia, although Apple is
rumoured to go back to Nvidia in upcoming models (as of 20120414). It
would be great to have users testing graphics switching on other
models, so email the mailing list if you are interested in tinkering
with this:

The plan from now on is to clean things up and hopefully get some of
this work merged upstream. Please get in touch if you have experience
with the linux graphics stack and you are willing to help out solving
issues like the reprobe/lock_ddc situation. There are also issues with
the Intel cards that have to do with resuming after a suspend, which
are in need of expert hands.

For more information on the hardware details, find below an excellent
document:

The Verge has produced a review for a monster gaming machine, the
updated Alienware M14x R2:
http://www.theverge.com/products/m14x-r2/5535
Posted by avilella at 09:57 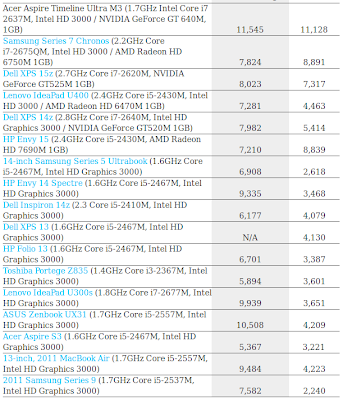